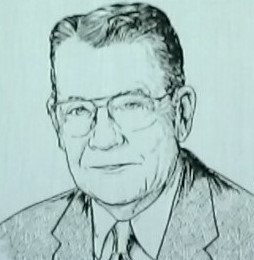 Bob Hill loves Ottawa and has spent his entire life working for the betterment of the community.

Bob earned a degree in economics from OU where he lettered in golf all four years, a game he has continued to love throughout his life.

Bob was a lieutenant in the U.S. Navy during World War II.  He served in North Africa, Italy, and was a commanding officer on LCI (Landing Craft Infantry) #212 at Utah Beach on D-Day.  After completing law school and being admitted to the Kansas Bar Association, he returned to Ottawa and pursued a more than 60-year career at the Kansas State Bank of Ottawa founded by his father in 1917.  He has served as principal owner, chairman of the board, and president.  He is currently chairman emeritus.

Bob was a Chamber leader, a founder of the Ottawa Industrial Park, and in the early 1960's co-chaired the bond drove for construction of Ottawa's flood control system.  South Main business development grew largely out of Bob's work to locate Wal-Mart in Ottawa.

Bob served as a trustee of Ottawa University from 1956 to 1987 and was awarded Life Trustee status in 1987.