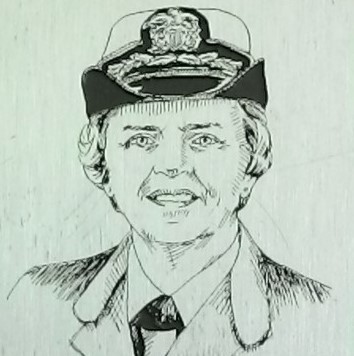 Kay graduated from Ottawa High School and then attended the University of Kansas, graduating with a degree in Physical Therapy.  She worked at St. Joseph's Hospital and Rehabilitation Center in Wichita, attaining the position of Chief of the Physical Therapy Department.

Miss Shaughnessy joined the US Navy in 1963.  She served at several naval hospitals around the country and in Japan.  She was head of the Physical Therapy departments at most of her assignments.

Captain Shaughnessy was selected as an Outstanding Young Woman of America in 1968.  She received the Meritorious Service Medal, Army Commendation Medal, and many other awards.  She was featured in the Pulitzer Prize award-winning book, Fortunate Son, written by Viet Nam War veteran Lewis B. Puller, Jr.

Miss Shaughnessy has been guest speaker for numerous clubs and organizations.  Since her retirement from the US Navy in 1987, Kay has made her home in Ottawa.